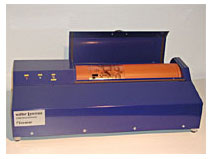 Filmstar is a small new raster photoplotter designed for users, who need to do quality photoplotting for a low price and quickly on the spot. Beside Gerber files (both standard and extended) photoplotter also works with TIFF data generated by Eagle layout system, hi-res BMP files and Postscript (option). Although this is a small, slow and inexpensive photoplotter, it does a very good job.


Principle
The film is fixed on the rotating drum. The laser diode moves step by step along the rotating drum by means of high precision screw driven by stepping motor. Drum rotation is electronically controlled. The Photoplotter is controlled from connected PC by software, which is a part of the package. This software allows doing simple film and drill panelization, editing D-codes, reverse and mirror image, preview, print preview, etc.
After plotting the film is developed, fixed and dried in a dark room.